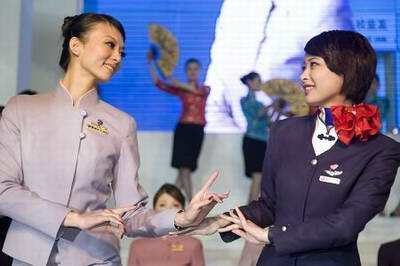 Morning News From the day of the first day, China Eastern Airlinesâ€™ direct flights between Taiwan and China will appear as flight attendants of Taiwanâ€™s â€œChina Airlinesâ€ (â€œChina Airlinesâ€) wearing water-pink uniforms. In the cabin of "China Airlines", there will also be an Eastern Airlines sister with red and blue silk scarves listening to the passengers. In addition to the flight attendant exchange program, both airline executives said that the next step will be closer cooperation.

In fact, the cooperation and exchanges between cross-strait airlines began in the mid-1990s. But as of now, this kind of cooperation is mostly concentrated on ground agents, transit links and so on. China Eastern Airlines said yesterday that this time, cross-strait airlines exchanged business for the first time in the form of exchange attendants. The main purpose of this kind of communication is to learn from each other, learn from successful service processes and special on-board services. Ma Xulun, general manager of China Eastern Airlines, bluntly stated that the purpose of the exchange was to provide more intimate and humanized services to more cross-strait passengers during the World Expo.

Yesterday, the exchange program was launched in Shanghai. On the same day, China Eastern Airlines flight from MU5005 from Shanghai to Taipei appeared on the flight of "China Airlines" flight attendants. The two sides agreed that in the next month, each flight attendant will be sent to each other's flight every day to learn from the other team and feel the passenger's appeal and brand preference. According to the arrangement, after the two-way exchange of the flight attendants is completed, the relevant management personnel in the field of air services will also conduct exchanges.

Ma Xulun also said yesterday that China Easternâ€™s planned non-public fundraising of 7 billion yuan in capital market financing will be in place at the end of this year. â€œThe eastward restructuring is progressing smoothly, and all legal procedures will be completed by the end of this year.â€ (Oriental Morning Post)

International air with its fast, safe, on-time efficiency to win a large market, greatly reducing the delivery time, with fast, maneuvering characteristics, is an international trade valuables, perishables and precision instruments transport of essential the way.

Air specific mode of operation are: flight transportation, charter transportation, groupage way; air courier transfer, cash on delivery methods, such as air transport mode.
1, flight is designated on the sail, fixed route, fixed originating station, way station and destination station aircraft. Its biggest feature is the certainty of departure and arrival times.
2, the charter airline or charter transportation means agency, in accordance with the parties hire people previously agreed conditions and rates for the whole or a part of the aircraft leased to charter space (compartment) people, from one or several airports shipment to the designated destination. In general, charter (cabin) compared freight flight is low, but smaller range of motion.