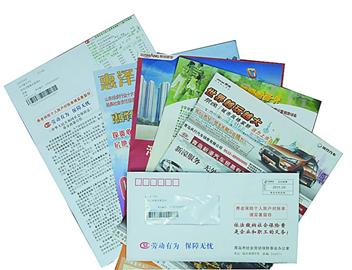 Recently, employees of the company have received personal accounts of pension accounts posted by the social labor protection business office in the city. In addition to filling the back of the bill with advertisements, five envelopes containing a total of twenty commercial advertisements were also included in the envelope. Many people questioned this.

How do these commercials appear in the envelope of the statement? A few days ago, the reporter launched an unannounced visit.

The social security statement attached twenty advertisements to the envelope of the statement. The reporter found that there are five folding pages of different sizes covered with 20 dazzling advertisements. The content is all-embracing: furniture and building materials sales, urology, male medical treatment , financing of credit companies, car sales, real estate promotions, promotion of insurance company health reserve cards, and even big hammer sales. And the singer's account statement should be accompanied by policy publicity, which only accounts for one sheet of A4 paper.

"I have found a statement on the account from a bunch of fancy advertisements. Is the department responsible for providing billing information or instilling advertising?" a company employee complained to reporters.

On the afternoon of September 27, the reporter consulted the business personnel of the Qingdao Post Bureau Business Letter Advertising Bureau of the â€œretailerâ€ pension account personal account statement for the relevant matters. A salesperson named Chen Ping told the reporter that since the coverage of personal accounts for the pension insurance covers a large area and has a wide range of influence, many companies are willing to choose to advertise on them. When the reporter stated that she was concerned that the Office of Social Labor Security would not allow such large-scale advertising, she assured reporters that they had signed an agreement with the social labor protection business office in advance and were authorized. â€œOur company can represent all advertising.â€

When talking about the advertising price, Chen Ping said that the price of advertisements on the reverse side of the bills is relatively high. The prices of other positions, such as the front and back of an A4 paper, add up to 75,000 yuan. â€œThis price is for the four districts in the city. There are more than 500,000 audiences. If you add Shangshan, Chengyang, Laixi and Jimo five cities, the price is probably more than 100,000 yuan.â€

Subsequently, she strongly recommended to reporters to issue advertisements on student medical insurance invoices, saying that more than 400,000 kindergarten children and elementary and middle school students in the city would receive this invoice, and the advertising price was similar to that of pension insurance. â€œThis invoice student will definitely take home to parents. In this way, the audience is equivalent to more than 100 million. You can leave a phone call now and we will send you a specific plan book.â€

Advertising for the payment of print delivery fees The reporter learned that starting in mid-August, the city began to print and issue the 2010 pension insurance personal account statement for social security personnel. It is reported that the statement issued this time involved more than 50,000 households insured 1.75 million insured personnel, among which, the corporate insurers' account statements were sent directly by the postal service to the participating units for distribution.

The reporter contacted the Social Labor Insurance Business Office of Qingdao City. A staff member surnamed Wang said that this situation had been reflected by the public. â€œThe printing and delivery costs of the bills are now paid by the standard of two cents a year ago. With the dramatic increase in printing and postage costs, this is no longer enough, and they entrusted the post office to print and mail. And allow them to act on behalf of some commercial advertising." But for the type of advertising, the staff said that they require the post office can not advertise medical, insurance and other aspects of advertising, "these ads are prone to cause public disgust."

The reporter learned that before the social security department paid the object to the bill, it was not the individual but the unit where the individual was located. The problem with this approach is that many companies do not publish individual accounts for reconciliation. Because information is asymmetric, some companies do not even pay employees social security contributions on time for several years, and employees have no way of verifying this. In order to allow employees to have the right to know, the social security department decided to deliver it to individuals, which resulted in a lot of delivery costs. These costs were chosen by the postal department.

This practice is easy to produce loopholes in social security. Is it possible to advertise on the bill? How does society react to this? With these questions, the reporter interviewed relevant departments and related persons.

A staff member of the Municipal Bureau of Industry and Commerce stated that the key to this problem lies in whether the units entrusted by the social security department have published advertising qualifications, whether they have filed applications for filing at the Industrial and Commercial Bureau, and if they have qualifications, they can register for advertisement in the Industrial and Commercial Bureau.

The reporter interviewed more than 10 citizens randomly. Most people expressed doubts about this. Mr. Liu, a citizen, believes that pension insurance bills are public goods after all. It is not appropriate to make large commercial advertisements on them. Mr. Lu, the citizen, even more outspoken: "The bills that could have been made at a glance have been so complicated that the social security department has abused public resources and prided itself on collecting money."

A lawyer of Deheng Law Firm stated that the social labor insurance business office is a government department, there is no corresponding advertising publishing function, nor can it authorize advertising agencies to carry out advertising agency. They can only promote the work responsibilities of the department, such as publicizing some social insurance knowledge. Wait.

â€œAlternatively, this practice is likely to lead to â€œextracorporeal circulationâ€ because they do not have the right to issue votes, and it is difficult for advertising revenue to avoid entering the private treasury. This kind of operation has no cost, there is a lot of room for loopholes, and there may be tax leakage. â€