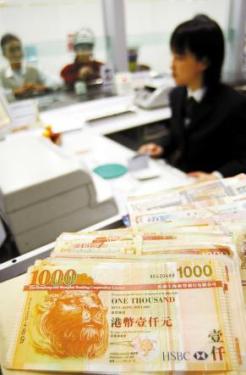 A few days ago, it was reported that many banks in Hong Kong raised the interest rate for offshore RMB deposits in Hong Kong. According to sources, the one-year RMB fixed deposit rate of BEA can reach a maximum of 2.25% per annum, which is more than four times the previous year's interest rate of 0.55%. At the same time, other Hong Kong banks have also begun to raise interest rates. Yesterday, the Nanfang Daily reporter consulted the Bank of East Asia's outlets in Hong Kong. The relevant staff said that the current fixed deposit interest rate of 2.25% is only for RMB 20 million of the renminbi deposits in the public accounts. If it is more than RMB 1 million individuals, â€œnew fundsâ€ (Newly opened funds) can only give a fixed interest rate of 1.75% over 4 months, and the remaining RMB deposits over 6 months are still executed at a 0.55% interest rate. The staff member also told reporters that â€œin the past, our fixed-term deposit rates for more than six months have been only 0.55%. This promotion has only recently begun. This is mainly due to the recent strong renminbi demand.â€

In addition, there are sources that a number of banks, including DBS, have also raised the yuan deposit rate in the Hong Kong market. Among them, DBS fixed 12 months of new funds in the RMB 100,000 yuan and 500,000 yuan or more, the annual interest rate increased by 1%. The Bank of Communications (Hong Kong) deposits RMB in excess of RMB 200,000 for 3 months, providing an annual interest rate of up to 2.1%; BOCHK provides 1.3% for RMB and RMB deposits of 3 months and 8 months respectively. 1.4% annual interest rate discount.

Yesterday, the relevant personage of the Economic Research Office of the Bank of China in Hong Kong interviewed this reporter also said that this situation is rather unexpected. He said that at present, Hong Kongâ€™s offshore renminbi market has not changed much as a whole. Raising interest rates may be just a decision made by some banks based on their own circumstances. Due to the recent fall in the RMB offshore market exchange rate, there are currently more people selling renminbi than those who buy renminbi in the Hong Kong market.