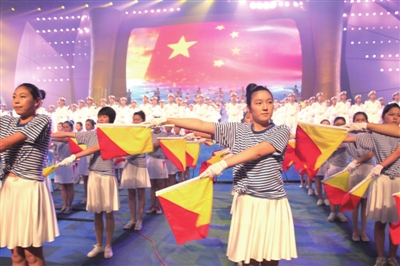 On July 11th, the celebration of the 2011 China Navigation Day with the theme of â€œPromoting the Sea and the Sea in the Seaâ€ was held in Zhoushan, Zhejiang. It is reported that this is Chinaâ€™s seventh sailing day and is also the 606th anniversary of Zheng Heâ€™s voyage to the West. It is also the day of the implementation of the World Maritime Day in China.

It is reported that Zhoushan is the only prefecture-level city in China that is built with archipelagos and has the reputation of â€œthe Haitian Buddhist Kingdom and the Yudu Port Cityâ€. The city has a total area of â€‹â€‹111,400 square kilometers, of which sea area is 110,000 square kilometers and land area is 1,440 square meters. There are 1,390 islands of total size, four island counties (districts), and a registered population of 970,000. Zhoushan is an excellent tourist city in China. It has rich marine tourism resources. It has two national scenic spots - Putuo Mountain and Liou Island. Putuo Mountain is the country's first 5A tourist attraction; it has two provincial scenic spots - Sheshan. Island and Peach Blossom Island, as well as numerous marine leisure islands. Zhoushan has become the focal point of China's island ocean tourism, the Yangtze River Delta marine tourism destination, Buddhist worship sites at home and abroad. Zhoushan boasts beautiful scenery, beautiful weather and beautiful environment. The blue sky, white clouds, green hills, sunshine, sandy beaches, and the sea are all aspirations. Recently, the Zhoushan New Island New Area has been identified by the State Council as China's first national strategic new area with the theme of marine economy.

The celebration meeting kicked off in the scenario interpretation of â€œJinghaiÂ·Yuan Hangâ€. The vice chairman of the CPPCC National Committee and Sun Jiazheng, chairman of the China Federation of Literary and Art Circles, attended the event and wrote an inscription for the 2011 China Navigation Day â€œLooking at the world and embracing the oceanâ€. Xu Zuyuan, deputy director of the Ministry of Transport, and deputy director of the China Navigation Day Organizing Committee, and Vice Governor Wang Jianman of Zhejiang Province respectively delivered speeches. Mr. Michael Chaplas, Secretary-General of the International Maritime Organization, sent a congratulatory message to the General Assembly.

Mariners cannot leave without seafarers. June 25 this year was the first World Seafarers Day. Zhoushan is the hometown of seafarers. The first full-scale contest for seafarers in the country, which took the last two weeks with the theme of â€œpromoting seafarer culture and building a strong seafarer nation,â€ also fell on Zhoushan on the day of sailing. This event is one of a series of activities for the 2011 China Navigation Day and an important part of the World Seafarers Day. It is reported that the seafarers' skills contest attracted a total of 40 teams and more than 400 players from 17 shipping companies and 23 colleges and universities, covering management, operation, and support levels. The conference awarded the certificate for Chinese seafarers' skill contest winners, and the Maritime Day Organizing Committee also awarded Zhoushan City the Chinese seafarers' military base plaque.

The water gathering ceremony of â€œLiu He Zhi Shuiâ€ will bring celebrations to a climax. The "Water of Six Harmonies" that implies affinity, harmony, harmony, harmony, harmony, and harmony are respectively assigned by the Ministry of Transport, the Ministry of Industry and Information Technology, the Ministry of Agriculture, the State Oceanic Administration, and the Navy's five sea-related departments. And Zhoushan City chose the site that featured the most representative of the industry or the city's characteristics to complete the water intake, and injected the international navigation channel through the big screen at the conference site. This symbolized the days of the Maritime Day event and the provincial and municipal organizations that celebrated the 90th anniversary of the founding of the Party. , Unity and cooperation, harmony and mutual benefit, and strive to promote the sound and rapid development of the marine economy.

It is understood that during the Maritime Day, Zheng He and the International Forum on Navigation and Navigation Technology, the China Piloting Navigation Forum, the First Zhoushan Islands International Boat Show, the China Maritime Equipment Technology Forum, the China Ancient Chart Exhibition, and the China Shipping Forum have also been held. Into Zhoushan and the 2011 Zhoushan Archipelago Aquatic Biological Resources Regeneration and Propaganda Activities in the East China Sea with Tajik Conservation Area, Ship Open Day and other special events. The sailing days at various branch venues are also colorful. In the Zhujiang Film Area Navigation Day, a Navigation Development Forum and Navigation Exposition was held to protect the Mother River. The youth sailing summer camps in Guizhou, Guangdong, Hong Kong, and Macao were awarded. The Zhujiang Scholarship was awarded and the Zhujiang Top 10 crew members were selected.